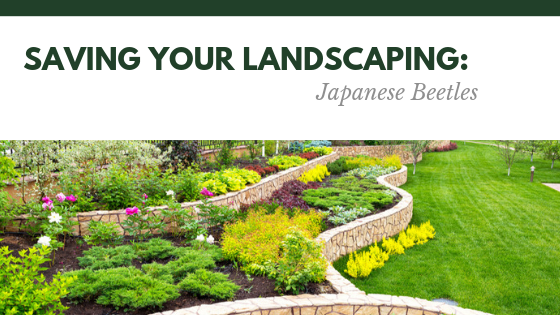 Japanese beetles are an invasive species that cause mayhem to landscapes throughout the US during its life span, both a grub and an adult. Entomologists believe they originally entered the country from Japan as grubs in the soil of Japanese iris roots at a New Jersey nursery in 1916. The adult beetles feed on hundreds of different plant species, while the grubs take over lawns, parks and even golf courses.

Need help to know what you need to be looking for? Adult Japanese beetles are about a half inch in length with a very shiny green head and bronze like body. You can distinguished them from other beetles by the white tufts on their sides.

Choosing the right route in saving your plants and landscaping is key and there are two routes you can go down. One route is insecticides, while the other is cultural controls. There are numerous insecticides available on the market to treat adult Japanese beetles including cyfluthrin, carbaryl, and bifenthrin. Japanese beetle traps would be your cultural control option but they can attract more beetles than they catch. If they are used, you should placed them 20 to 30 feet away from the plants you want to protect. Eliminating the grubs in the soil is the best proactive measure, and if the beetles are present using insecticide Sevin spray will eliminate them. The adults emerge from the ground and begin to feed June to early August, so catching them before they spred and using the right elimination method could mean life or death for your yard.

Get a free estimate